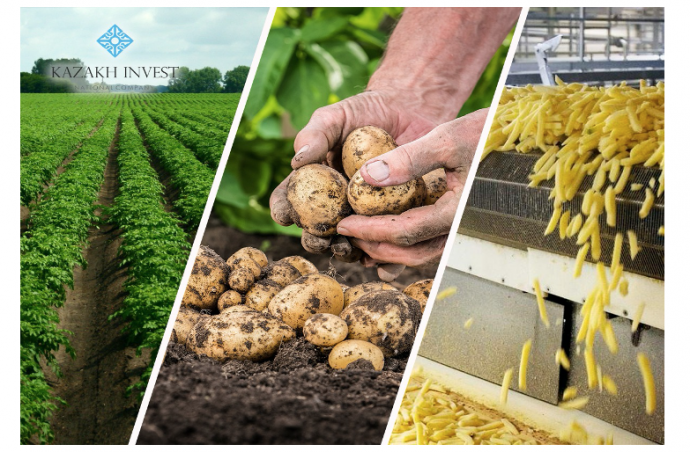 This was reported during a meeting on attracting investments and implementing projects in cooperation with Dutch companies.

During the meeting, issues of cooperation, targeted and promising projects developed jointly with companies from the Netherlands were discussed. Representing one of the most developed agricultural countries in the world, with great expertise and modern technologies, investors are highly interested in the agricultural sector of Kazakhstan.

In particular, the participants discussed the prospects for implementation of the Farm Frites project. The project aims to build an integrated plant for the production of French fries, which includes 3 components: construction of the plant itself, a farm for growing raw materials and training Kazakhstan farmers, development of a seed base for further import substitution of elite potato seeds. The project provides for the processing of 140 000 tons of potatoes and the production of 70 000 tons of finished products, as well as the creation of 400 permanent jobs.

A potential region for placing of the project has become the Zhambyl region. The choice of the region is due to studies that a potential investor has been conducting in the Republic for three years. So, varietal trials of potatoes were carried out; experts also took into account temperature conditions, rainfall, water balance and chemical analysis of irrigation water; soil analyses and other studies were conducted by leading agricultural institutes in Europe. The study also noted the absence of soil diseases that harm growing of vegetable crops. As a result, the greatest potential for growing potatoes for further production of Fries was noted in the southern regions of the Republic.

It should be noted that today in Kazakhstan there are no enterprises specializing in the industrial production of French fries. Construction of the plant, according to the experts of KAZAKH INVEST, will satisfy the demand in the domestic market and will allow exporting products to foreign countries.

On the whole, the Fries market is showing steady growth, its volume is over 12 million tons. Global sales for this industry are estimated at $ 15 billion. Growth forecasts for countries with emerging markets such as Russia, the Middle East, Latin America, China and Asia are 5–8% per annum, while a growth forecast for Western countries regions with a high level of consumption is 0.5-2%. The leaders in the consumption of potato processing products among European countries are the UK - 11 kg per capita, as well as the Netherlands and Belgium - 10 kg per capita. In the CIS countries, consumption is less than 1 kg per year, but there is significant potential for increased consumption of processed potato products.

As Timur Tilinin, Deputy Chairman of the Management Board of KAZAKH INVEST, noted, the Kazakhstan investment promotion agency, which he represents, is ready to provide comprehensive support for the investor, to work out all issues together with government bodies and local partners. Attracting TNCs entails organizing the production of a full cycle, which implies technological processes from the selection of varieties and planting to the sale of finished products. This project will also attract modern agricultural technologies to the region and give impetus to the development of local agricultural producers and service providers.

During the meeting, the participants were instructed to study and work out all the issues with state bodies for implementation of the project.