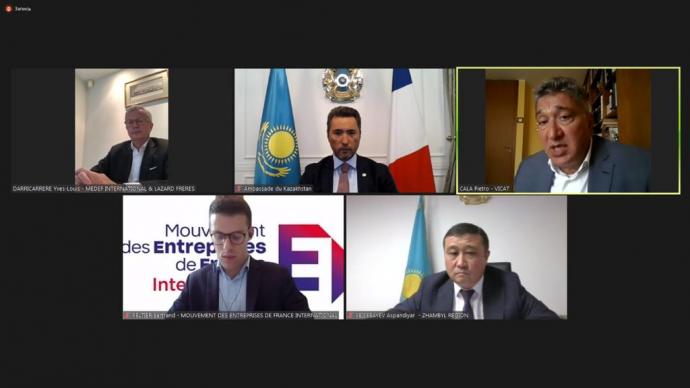 As part of the investment marathon of the presentation of the regions of Kazakhstan to French partners, which started at the beginning of the year, an online meeting was held between the Akimat of Zhambyl region and companies represented in the largest business association of France “MEDEF”.

The event was attended by Ambassador of the Republic of Kazakhstan to France Jean Galiev, Co-Chairman of the Kazakh-French Business Council Yves-Louis Darricarrère, Head of the Department of Entrepreneurship and Industrial and Innovative Development of the Akimat of Zhambyl region Aspandiyar Seisebayev, representatives of “NC “KAZAKH INVEST” JSC, the Association of French Entrepreneurs MEDEF as well as more than forty representatives of the French business community.

Opening the webinar, Yves-Louis Darricarrère noted the attractive investment potential of the region, which represents a wide range of opportunities for French companies.

Confirming this thesis, the Ambassador of Kazakhstan drew the attention of the meeting participants to the emergence of new prospects for cooperation in the areas that the Head of State Kassym-Jomart Tokayev outlined in his address to the people on September 1 this year.In particular, the diplomat noted that Zhambyl region has a huge potential for implementing projects of the mining and metallurgical complex (MMC) together with French companies. To this end, in the near future, the administration of the region will present a list of specific projects that can interest industrial enterprises in France.

The Ambassador of Kazakhstan also noted that a prime example of cooperation in the region is the successful operation of the “Zhambyl-Cement” plant of the French “Vicat” group, which for many years has been reinvesting in production, improving technologies, creating new jobs and improving social infrastructure. 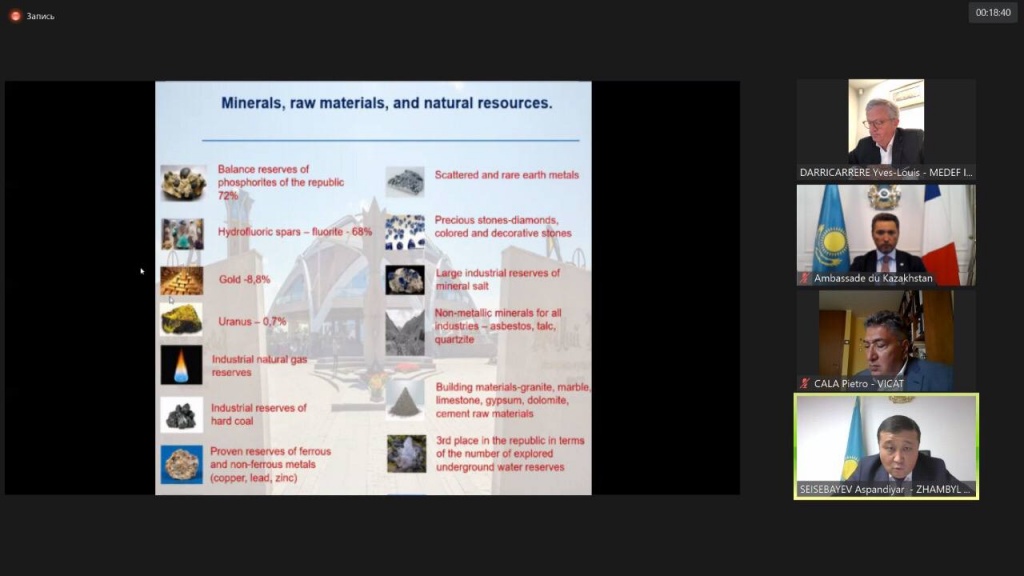 In turn, Aspandiyar Seisebayev presented to the French side the investment potential of the region, plans for the further development of new industrial sites and improvement of urban infrastructure. At the same time, niche projects for investment in such industries as MMC, tourism, construction, agribusiness, manufacturing and other priority areas were presented.

One of the largest French TNCs “Saint-Gobain” last year implemented a project for the production of gypsum dry building mixes and drywall, investing $15 million. Representatives of this company also announced their intention to reinvest together with the company “Vicat” by the production of plastic bottles.

At the end of the webinar, Aspandiyar Seisebayev expressed his readiness for a close dialogue with French companies on all the announced proposals and the implementation of joint investment projects in the region.

The investment marathon on unlocking the potential of Kazakhstan's regions was initiated by the Embassy of the Republic of Kazakhstan in France and is being held with the support of the co-chairs of the Kazakh-French Business Council, the Association of French Entrepreneurs MEDEF and “NC “KAZAKH INVEST” JSC.