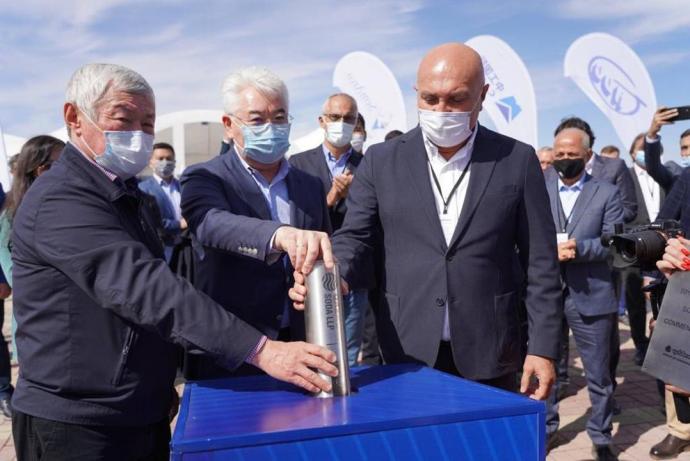 A solemn ceremony of laying the foundation stone of a soda ash production plant was held in the Sarysu district of Zhambyl region. The project is implemented by the Turkish company “Yildirim Holding” with the support of “NC “KAZAKH INVEST” JSC. The ceremony was attended by Minister of Industry and Infrastructure Development Beibut Atamkulov, Akim of Zhambyl region Berdibek Saparbayev, Ambassador of Kazakhstan to Turkey Abzal Saparbekuly, President of “Yildirim Holding” Yüksel Yildirim.

The total volume of investments in the economy of Kazakhstan within the framework of the project will be about $400 million. It is expected that about 250 jobs will be created at the enterprise. In order to improve the skills of local personnel, investors intend to organize training of specialists.

“The project has the main competitive advantage – the possibility of sending salt in brine directly to the processing enterprise via pipelines, which eliminates several production cycles available at traditional enterprises”, - said Dilyara Tektigulova, Project Manager of “NC “KAZAKH INVEST” JSC.

The total capacity of the project will be 500 thousand tons of products per year with the possibility of a gradual increase to 1 million.

According to investors, during the implementation of the project will be used unparalleled in the world, patented by the investor technology of zero waste. This will significantly reduce the cost of the final product compared to similar traditional enterprises.

During the ceremony, the Minister of Industry and Infrastructure Development Beibut Atamkulov noted that this plant will be the first to produce soda ash in the country. By the way, today Kazakhstan fully imports these products from Russia and Uzbekistan. Kazakh Ambassador to Turkey Abzal Saparbekuly noted that thanks to the coordinated work of the Ministry of Foreign Affairs of the Republic of Kazakhstan, KAZAKH INVEST and other state bodies, as well as the strict control of the local administration, the project received comprehensive support. He also noted that this project is strategically important not only for the region, but also for the whole country.

It is noted that the project will completely replace the import of soda ash. When the plant is launched, the needs of the domestic market will be fully met. Also, up to 30% of the products will be exported. It is planned that the share of new production in the future will account for about 22% of the market of the CIS and the Baltic countries.

For reference: “Yildirim Holding” is a Turkish diversified industrial group founded in 1993. Today, the Holding operates in 8 sectors with an annual turnover of $ 2.2 billion. The structure of the Holding employs about 13 thousand people on 5 continents in 51 countries of the world. The total amount of assets exceeds 5.6 billion US dollars.

The holding is the fourth largest group in the global chromium industry (one of the world's largest producers of chromium ore and the world's 2nd producer of high-carbon ferrochrome) with plants in Turkey, Kazakhstan, Russia and Sweden. The holding operates in such areas as cargo transportation by sea, energy, import of coal, coke and chemical products, real estate asset management and more.